Stand Up Comedy Night at The Old Bell Hotel

Join us for a hilarious evening of comedy in our Grand Regency Ballroom, featuring 4 fantastic acts. Laugh the night away in one of Derby’s oldest and most historic buildings.

Funhouse Comedy Club returns to The Old Bell Hotel in 2022. Join us on Friday January 28th for another great night of laughter. New year, new comedians…same great night out! 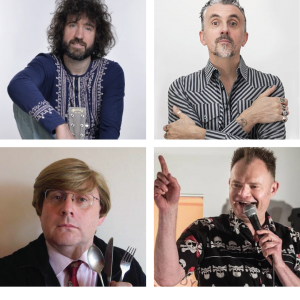 Topping the bill is the unique and side-splittingly funny Micky P Kerr with his unusual mix of comedy, various music genres and things people say. He appeared on ITV’s ‘Britain’s Got Talent’ where he baffled Simon Cowell with his ‘Bag for Life’ song and earned himself a place in the finals.

Opening the night will be the intelligent, controversially witty and hip Markus Birdman. Regarded by many in the know as one of the best circuit acts in the country, he has toured internationally and had highly acclaimed shows at the Edinburgh Festival. His dandyish onstage confidence, versatility and infectious nature result in a truly absorbing performance.

Completing the line-up is the incredibly funny cutlery sage Ian Crawford, with his unique safety advice.

Compere for the night is the tremendously talented Barry Dodds.

Funhouse Comedy Club is back on Friday February 25th for more fun and laughter.

Opening the night will be the animated Sean Heydon, one of the country’s premier comedy magicians, who has appeared on various TV shows, including Britain’s Got Talent where he got a unanimous 4 yes’ from the judges and has also appeared on Channel 4’s Paul O’Grady Show, as the resident illusionist. With his unique style, he captivates the crowds, often receiving standing ovations.

Topping the bill is 2021 British Comedian of the Year Finalist, Greek comedian George Zach who has supported Luisa Omielan on tour. After gaining a degree in England he decided not to return to his home on a Greek Island. Instead, he chose to follow his passion for comedy, live in Newcastle and now entertains audiences with his funny Geordie observations.

Completing the line-up is winner of Funhouse’s Should I Stay or Should I Go competition and semi-finalist in British Comedian of the Year, the up-and-coming Jacob Nussey who draws you in with his low-status, surreal, and often dark style.

Compere for the night will be Barry Dodds, winner of Best MC, Midlands Comedy Awards for 4 years running, who enthrals everyone with his energy, spirit and tantalising wit.